The Graduate Management Admission Test (GMAT ) is a computer adaptive test (CAT) intended to assess certain analytical, writing, quantitative, verbal, and reading skills in written English for use in admission to a graduate management program, such as an MBA. It requires knowledge of certain grammar and knowledge of certain algebra, geometry, and arithmetic, It can be taken up to five times a year. Each attempt must be at least 16 days apart

The GMAT exam consists of four sections: an analytical writing assessment, an integrated reasoning section, a quantitative section, and a verbal section. Total testing time is three and a half hours, but test takers should plan for a total time of approximately four hours, with breaks. Test takers have 30 minutes for the analytical writing assessment and another 30 minutes to work through 12 questions, which often have multiple parts, on the integrated reasoning section and are given 75 minutes to work through 37 questions in the quantitative section and another 75 minutes to get through 41 questions in the verbal section.

The AWA consists of one 30-minute writing task—analysis of an argument. It is important to be able to analyze the reasoning behind a given argument and write a critique of that argument. The essay will be given two independent ratings and these ratings are averaged together to determine the test taker's AWA score, One rating is given by a computerized reading evaluation and another is given by a person at GMAC who will read and score the essay themselves without knowledge of what the computerized score was

The analytical writing assessment is graded on a scale of 1 (minimum) to 6 (maximum) in half-point intervals (a score of zero means the answer was gibberish or obviously not written on the assigned topic or the test taker failed to write anything at all on the AWA). 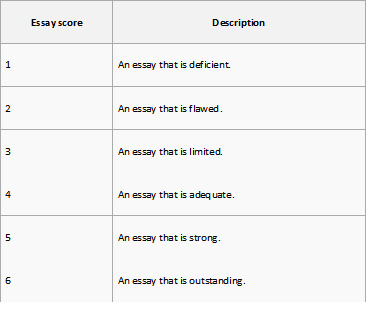 Integrated Reasoning (IR) is a section introduced in June 2012 and is designed to measure a test taker’s ability to evaluate data presented in multiple formats from multiple sources. The skills being tested by the integrated reasoning section were identified in a survey of 740 management faculty worldwide as important for today’s incoming students. The integrated reasoning section consists of 12 questions, The integrated reasoning section includes four question types: table analysis, graphics interpretation, multi-source reasoning, and two-part analysis. In the table analysis section, test takers are presented with a sortable table of information, similar to a spreadsheet, which has to be analyzed. Each question will have several statements with opposite-answer options (e.g., true/false, yes/no), and test takers click on the correct option, Graphics interpretation questions ask test takers to interpret a graph or graphical image, Two-part analysis questions involve two components for a solution. Possible answers are given in a table format with a column for each component and rows with possible options. Test takers have to choose one response per column

The quantitative section of the GMAT seeks to measure the ability to reason quantitatively, solve quantitative problems, interpret graphic data, and analyze and use information given in a problem. Questions require knowledge of certain algebra, geometry, and arithmetic. There are two types of quantitative questions: problem solving and data sufficiency. The use of calculators is not allowed on the quantitative section of the GMAT. Test takers must do their math work out by hand using a wet erase pen and laminated graph paper which are given to them at the testing center. Scores range from 0 to 60, although GMAC only reports scores between 6 and 51. Data sufficiency is a question type unique to the GMAT designed to measure the ability to understand and analyze a quantitative problem, recognize what information is relevant or irrelevant and determine at what point there is enough information to solve a problem or recognize the fact that there is insufficient information given to solve a particular problem

The verbal section of the GMAT exam includes the following question types: reading comprehension, critical reasoning, and sentence correction. Each question type gives five answer options from which to select. Verbal scores range from 0 to 60; however, scores below 9 or above 44 are rare, According to GMAC, the reading comprehension question type tests ability to analyze information and draw a conclusion. Reading comprehension passages can be anywhere from one to several paragraphs long, According to GMAC, the sentence correction question type tests grammar and effective communication skills. From the available answer options, the test taker should select the most effective construction that best expresses the intent of the sentence Scoring

The total GMAT score ranges from 200 to 800 and measures performance on the quantitative and verbal sections together (performance on the AWA and IR sections do not count toward the total score, those sections are scored separately). Scores are given in increments of 10 (e.g. 540, 550, 560, 570, etc.). From the most recent data released by GMAC, the average GMAT score of all test takers is about 540.

The final score is not based solely on the last question the examinee answers (i.e. the level of difficulty of questions reached through the computer adaptive presentation of questions). The algorithm used to build a score is more complicated than that. The examinee can make a mistake and answer incorrectly and the computer will recognize that item as an anomaly. If the examinee misses the first question his score will not necessarily fall in the bottom half of the range After previewing his/her unofficial GMAT score, a GMAT test taker has two minutes to decide whether to keep or cancel the GMAT score. A cancelled score can be retrieved within 60 days for a fee of $100. After 60 days a cancelled score is not retrievable.